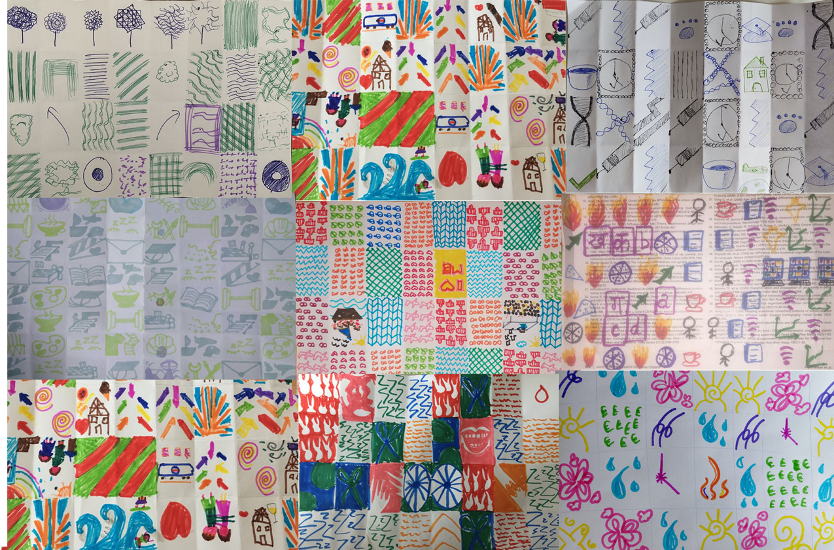 In June, students from the Centre for Doctoral Training in Smart Medical Imaging had a chance to take part in Create Escape: a series of weekly workshops facilitated by artists, makers and creators to bring the community together during lockdown.

The sessions were held online, delivered by a different creative practitioner each week between 3 and 23 June. Participants created mandalas (geometric-like symbols) with Julia Vogl, learned new drawing techniques from Jenny Leonard, produced a soundscape with Anna Staufenberg and made their own zine with Hana Ayoob.

The virtual format came with its challenges, but according to Julia Vogl, it may have ultimately allowed for deeper concentration and enjoyment. She said: “With everyone in the comfort of their own home, there was another safety net for many, and while they could not share the experience physically, it was nice to see everyone working away and sharing via chat.”

The students’ background in science informed the content of the workshops. Anna Staufenberg said: “I found the experience of working with scientists particularly rewarding, as it meant I could get more into the nitty-gritty of the science of sound – in fact, I think they knew a lot of it already!”

Jenny Leonard’s session prompted CDT student Virginia Fernandez to experiment with a technique she learned in her own time. She used a method taught by the artist for a piece inspired by her research in the CDT in the CDT, which is focused on developing a generative model of the diseased human brain.

Virginia said: “Thinking of Alzheimer and how some neurons degenerate, I made a drawing of our garden and then started applying sets of four alternating colours using a neuron pattern. Some of the colour sets are vivid, and some are greyish, conveying the idea of Degeneration.”

Bella Spencer, Public Engagement Officer and the organiser of the series said: “With each workshop, the students surprised me with their incredible artistic approach, innovative ideas and lateral thinking.”

“The CDT is home to a wonderful group of public engagement ambassadors, who provide me with great advice and insights. When organising Create Escape, I asked them to select their top four workshop proposals, which were submitted by artists, makers and creators from a range of disciplines”, she said.

Public engagement plays an important role in student life at the School of Biomedical Engineering & Imaging Sciences at King’s College London, enabling mutual learning between the public and the academic community. Students in the CDT in Smart Medical Imaging and CDT in Surgical and Interventional Engineering benefit from a varied programme of public engagement activities and some take an active role in the planning and delivery of new projects as well.