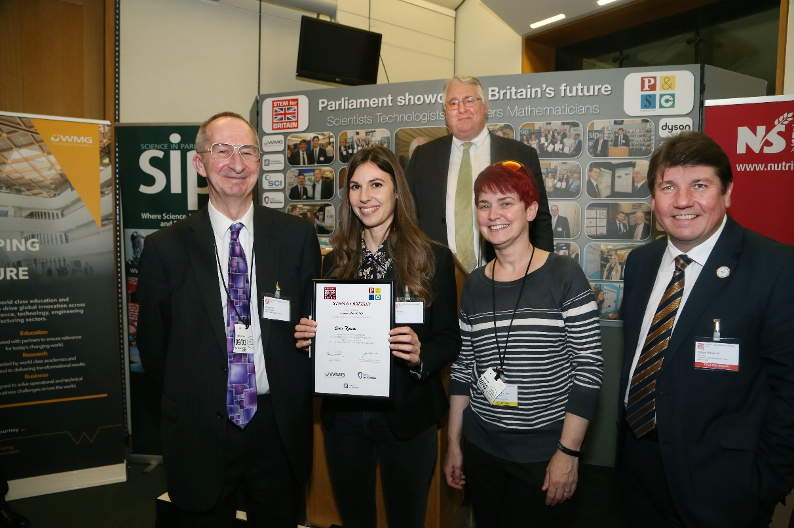 On Monday 9 March 2020, George Firth, a third year CDT student, and Elisa Roccia, a final year CDT student, attended the STEM for BRITAIN event held in the UK’s Houses of Parliament to present their novel research to like-minded scientists and members of parliament alike. The bar was set high given the success of our very own Sophie Morse, who took home the gold medal in Engineering and the Westminster’s Medal for the overall winner in last year’s event.

George’s poster explained his research on the emerging field of ‘PET metallomics’ – using radioactive metals of essential trace metals such as zinc, copper and manganese to non-invasively study their trafficking in health and disease in vivo. He was awarded the Nutrition Society Prize for scientific excellence at an early career stage in nutritional science.

“I thoroughly enjoyed taking part in STEM for Britain this year. This event provided a great opportunity to share my research with members of parliament, and importantly, with a wider lay audience who wouldn’t regularly engage with scientific research. The people I spoke to during the event were highly interested in the novel research we do at King’s College London in medical imaging with radioactive metals. Importantly, having a fresh pair of eyes, during the preparation of my poster with feedback from people in the department, but also great discussions with others at the event, showed me new avenues for research that we can implement back in the lab. I was honoured to receive the Nutritional society sponsored prize and will share this award with my friends and colleagues with a celebration at our local pub.”

Elisa’s poster detailed the power of MRI in providing early detection and determining personalised treatment regimens for men with prostate cancer. She was awarded the Silver Medal in the Engineering category at the event.

“The STEM for Britain competition was a great opportunity to promote the communication between researchers and policy makers, I was thrilled to discuss my PhD work with a very different type of audience. After the event I went home with many new ideas for my research, and of course I was honoured to have won the Silver Award in Engineering.

I’d like to thank the organisers for such an inspiring opportunity, and my fellow early career researchers for the great afternoon spent together!”