Addressing the brain correspondence problem: predicting robust and accurate mappings between multi-modal feature sets through use of deep learning

Image registration is a cornerstone practice of medical image analysis as it allows multiple images, taken from the same organ, but different subjects, to be directly compared. The goal of image registration is to learn a spatially-constrained transformation, that maps equivalent structures in different images to a common location in a global coordinate space. In neuroimaging this is particularly challenging as brain surfaces (cortices) vary considerably in terms of their shape and functional organisation. An even greater challenge is to know what equates to a ‘good’ mapping, since mappings learnt separately for cortical shape or function tend to disagree (Nenning 2012, Glasser 2016).

In this project we propose to use advances in Deep Learning to derive generalisable descriptors of brain function and structure. These will be used to derive unique mappings between multimodal (functional and structural) markers of cortical organisation. In this way, it will be possible to improve the sensitivity of comparisons between brain imaging data sets, and thus improve our capacity for early diagnosis of complex neurological conditions such as Autism and Alzheimer’s disease.

The human brain is a vastly complex system. Therefore, it is common practice within neuroimaging studies to make simplifying assumptions that allow data to be compared across subjects. A common assumption is that, at a coarse scale, all brains follow a common pattern of organisation, and can be represented by a relatively small number of functionally specialised regions (Fig.1).

Figure 1: The adult human brain surface composed of 360 functionally specialised regions (Glasser et al 2016). Different regions have different shading: motor regions are in green, visual regions in blue, auditory regions in shades of red and higher order regions  (recruited for complex tasks) in degrees from black/brown to white. This map is shown on an inflated model of the brain’s surface.

Importantly, almost all current studies assume that all brains have the same number of regions, and that these appear in the same relative position in all brains (Glasser 2016). This allows different brains to be straightforwardly compared by mapping all data to a global average space using spatially constrained deformations. Unfortunately, there is a growing body of evidence to suggest these assumptions are false. In fact brain organisation varies topologically, that is the location of regions relative to their neighbours differs across brains. As a result spatially (or topologically) constrained deformations are unable to accurately match regions between brains. This leads to a reduction in sensitivity of all brain imaging studies.

This project builds upon previous work (Robinson 2014,2017) conducted as part of the Human Connectome Project (HCP) that allowed us to map the organisation of the adult human cortex in unprecedented detail (Glasser 2016). These studies have shown that deriving mappings using multiple imaging modalities (reflecting brain shape, function and micro-structural organisation) can improve the accuracy of correspondences between brain imaging data sets. This is due to the fact that correspondences learnt between brain shapes do not agree with those learnt between patterns of brain functional activations (Glasser 2016, Nenning 2017).

This project proposes to extend these techniques to learn mappings between complex multi-modal cortical imaging feature sets derived from the HCP. Through Deep Learning it will be possible to derive generalisable descriptors of brain function and structure that can be used to derive unique mappings between multimodal markers of brain organisation. These mappings will provide the community with improved understanding of how the human brain is organised, and will increase the sensitivity of population imaging studies leading to better understanding of how differences in cortical organisation impact brain function and behaviour. 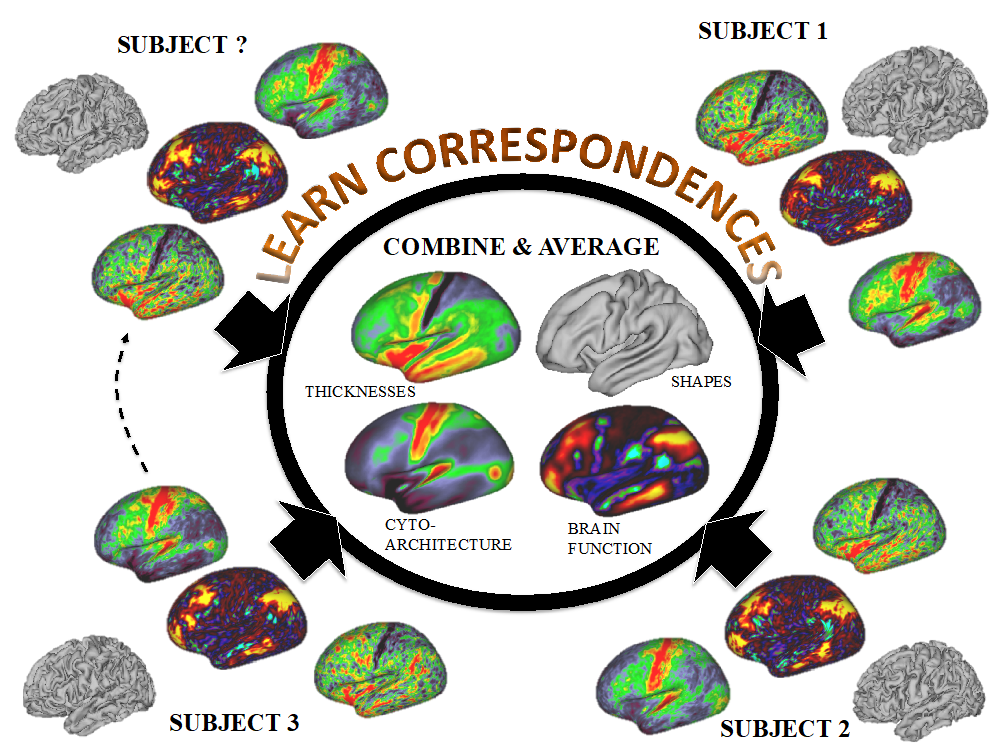