In recent years, there has been a growing interest in exploring differences in brain-related imaging traits between healthy controls and subjects with a neurological disorder. An important motivation for investigating disease-related structural and functional abnormalities in patient brains is to find stable neuroimaging-based biomarkers which can potentially improve upon currently adopted diagnostic systems which are based solely on clinical manifestations.

For a number of diseases, such as different types of dementia and schizophrenia, voxel-based analysis methods have provided a strong body of evidence to demonstrate the existence of structural and functional abnormalities in some brain regions. Recent studies have begun to investigate whether abnormal functional integration can be found in particular brain regions using both resting state and task-based study designs. In schizophrenia, for instance, some initial evidence suggests that functional disconnectivity distributes widely throughout the entire brain rather than being restricted to a few specific brain regions, and have suggested that schizophrenia might arise from abnormalities in a distributed network of brain regions. This disconnection hypothesis has also been supported by increasing evidence from structural neuroimaging data such as diffusion tensor imaging (DTI) and magnetic resonance imaging (MRI). Similarly, altered functional and structural connectivity has been used to differentiate between different types of dementia. 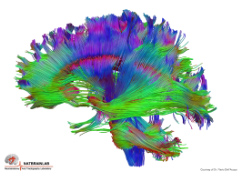 The first supervisor has previously developed a multivariate method for assessing dynamic network connectivity for fMRI data, SINGLE (Pio Monti et al. NeuroImage, 2014), that does not rely on a simple sliding time window approach. The proposed studentship would further develop this approach and apply it to classify patient data and allow the development of potential biomarkers for patient stratification.