The project aim is to explore and develop novel machine learning approaches based on ‘deep learning’, as applied to serial low-dose lung CT imaging for early lung cancer identification in high-risk cohorts.  Early identification is challenging because symptoms are non-specific (or absent), compounded by overlap with symptoms of chronic obstructive pulmonary disease (COPD). Early diagnosis using CT relies on the detection of lung nodules and an accurate evaluation of their growth. However, manual radiological assessment is problematic because of inter-observer and inter-scan variability. This project will address the key medical imaging challenges arising from co-existent emphysema, inter-current infection, differing levels of inspiratory effort and variable acquisition parameters in patients with CT-detected nodules, by devising novel solutions using machine learning methods belonging to the class of deep learning architectures, an emerging and particularly promising area of medical image analysis, in order to detect lung cancer at an early stage. 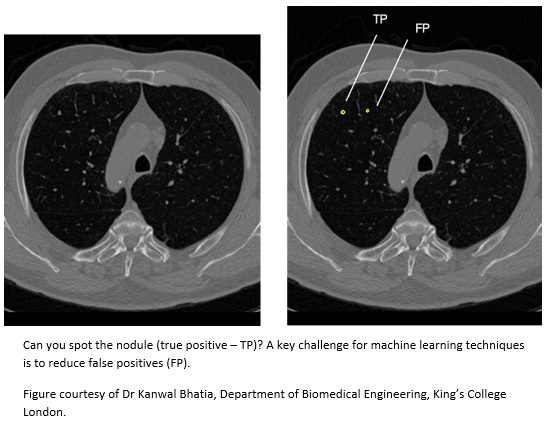 Lung cancer has the second highest incidence of cancers worldwide for both the male and female population, and remains the cancer with the highest mortality. This is because it remains asymptomatic for a long time, and is therefore diagnosed mostly at such a late stage that treatment outcome is poor. Despite this, the UK currently does not have a lung cancer screening programme for early detection of lung cancer. This is not only due to the high costs involved if applied to a large proportion of the population, but also the lack of a sufficiently sensitive diagnostic test, including imaging. Current research in screening for lung cancer is therefore limited to patients identified at high risk of developing lung cancer, such as smokers or patients with COPD (or both), but it is anticipated that this research could form an important foundation for a future national screening programme.

Machine learning approaches are becoming increasingly popular in radiology [1]. The lack of sufficient amounts of labeled image data render most supervised machine learning techniques impractical, but semi- or unsupervised methods, including those based on deep learning architectures, show great promise in overcoming this limitation. Current efforts in lung imaging focus on classification of nodules using convolutional neural networks (CNN) taken off-the-shelf using standard features (intensity, texture etc) for lung CT from multi-centre screening trials [2], or classifying lung disease from chest radiographs by learning features using CNNs where the first layer is trained using natural images [3]. None of these works investigate follow-up imaging and do not deal with the need for establishing spatial correspondence for follow-up. In [4], deep feature learning using a 2-layer CNN was applied to the quite different problem of MR brain spatial normalisation. Their unsupervised deep learning approach directly learns basis filters that represent a set of observed image patches, and whose coefficients can then be used for correspondence detection during image registration.

This project is inspired by [3], in that it will explore the use of different types of data for deep feature learning (like natural images as in [3], but also high-contrast lung CT images); as well as by [4] in that we will embed learnt features into a deformable registration framework. The important methodological difference is that we will learn both high/low-contrast hierarchical image features as well as complex motion patterns, which can be naturally embedded into a Markov random field (MRF) driven registration framework (see e.g. [5,6]); the important application contribution is that we will apply this to serial registration of low-dose, low contrast lung CT to simultaneously detect/classify and track lung nodules in patients at risk of developing lung cancer.