Mechanical forces – the pulsing of blood, pumping of the heart, stretching and grabbing of immune cells – govern the daily life of our bodies. When the mechanics of a cell or tissue go awry, they give early clues to a developing disease – changes in blood flow have been linked to atherosclerosis and changes in stiffness have been linked to cancer metastasis. Catching these signs early could save lives by getting the right treatments to the patient before the disease becomes unmanageable. Recent developments in ultrasound and magnetic resonance imaging have demonstrated the ability to image tissue elasticity – also known as elastography. However, these methods can neither resolve very small regions of changes nor very small changes in stiffness, and so the vast majority of diseases with known changes in mechanical properties remain undiagnosable. The purpose of this PhD project is to overcome these resolution and contrast limits by developing the world’s first contrast-enhanced ultrasound elastography system. Tissue elasticity, regardless of the method, is measured by a three-step process: (step 1) apply stress onto the tissue of interest, (step 2) track the tissue deformation, and (step 3) extract elasticity measurements based on the deformation response. To overcome resolution and contrast limits, we propose a novel stress source that is inspired by the atomic force microscope (AFM). Whereas AFM uses a nano-sized tip to press and relax against a material’s surface to give nano-sized elasticity measurements, we are proposing the use of a single microbubble to press and relax against cells of our body to give micron-sized elasticity measurements. Softer tissue will deform more than stiffer tissue (e.g., cancer is stiffer). To demonstrate the feasibility of this, we used focussed ultrasound as a ‘remote control’ energy source that can selectively control the movement of microbubbles (Fig. 1). When no microbubbles were present, ultrasound did not interact with the tissue. However, microbubbles are designed to respond (through resonance behaviours) to specific frequencies of sound.  When microbubbles were present, ultrasound pushed them away from the transducer and against the distal surface causing a transient and safe tissue deformation. This is the first demonstration of the use of acoustic particles to palpate tissue. This would provide not only a non-invasive way of measuring tissue elasticity, but it would give the best imaging resolution and contrast over those currently available. This means detecting diseases earlier and with greater diagnostic accuracy. We are seeking a passionate, intellectual, and dynamic individual who can work on a multi-disciplinary team to take on this challenging project. The work will involve the understanding of how ultrasound can be used to selectively push a microbubble (i.e., acoustic radiation force) against soft materials and derive elasticity values (e.g., Young’s Modulus). The student will also develop methods to control and track the microbubble movement using an ultrasound transducer, a programmable ultrasound imaging engine, and advanced signal and image processing algorithms. We are seeking the best candidate with a background in physics or any engineering discipline.

Fig. 1. Experimental setup. A focussed transducer (5 MHz) driven by a function generator and power amplifier emitted ultrasound that converged to a small focal volume within a phantom. A wall-less tunnel within the phantom (1.2% gelatin) represented a physiologically relevant vessel in our body. The interaction of the ultrasound, microbubbles, and tissue were observed using a high-speed optical microscope (1,200 frames per second). [pilot data] 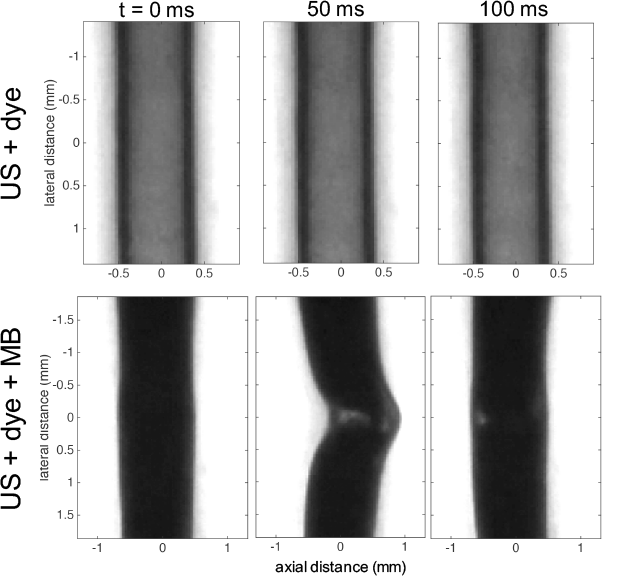 Fig. 2. Feasibility of Acoustic Particle Palpation. A wall-less vessel phantom (1.2% gelatin) contained a dark dye with either (top row) water only or (bottom row) microbubbles (MBs). The images are zoomed into the focal volume (first column) before, (middle column) during, and (last column) after ultrasound (US) exposure (centre frequency: 5MHz, peak-negative pressure: 400kPa, pulse on time: 50 ms). US propagated left to right and produced (top row) no displacement with US alone, and (e) a large displacement with MBs. This is the first demonstration that acoustic particles can be used to palpate and measure tissue elasticity. [pilot data]