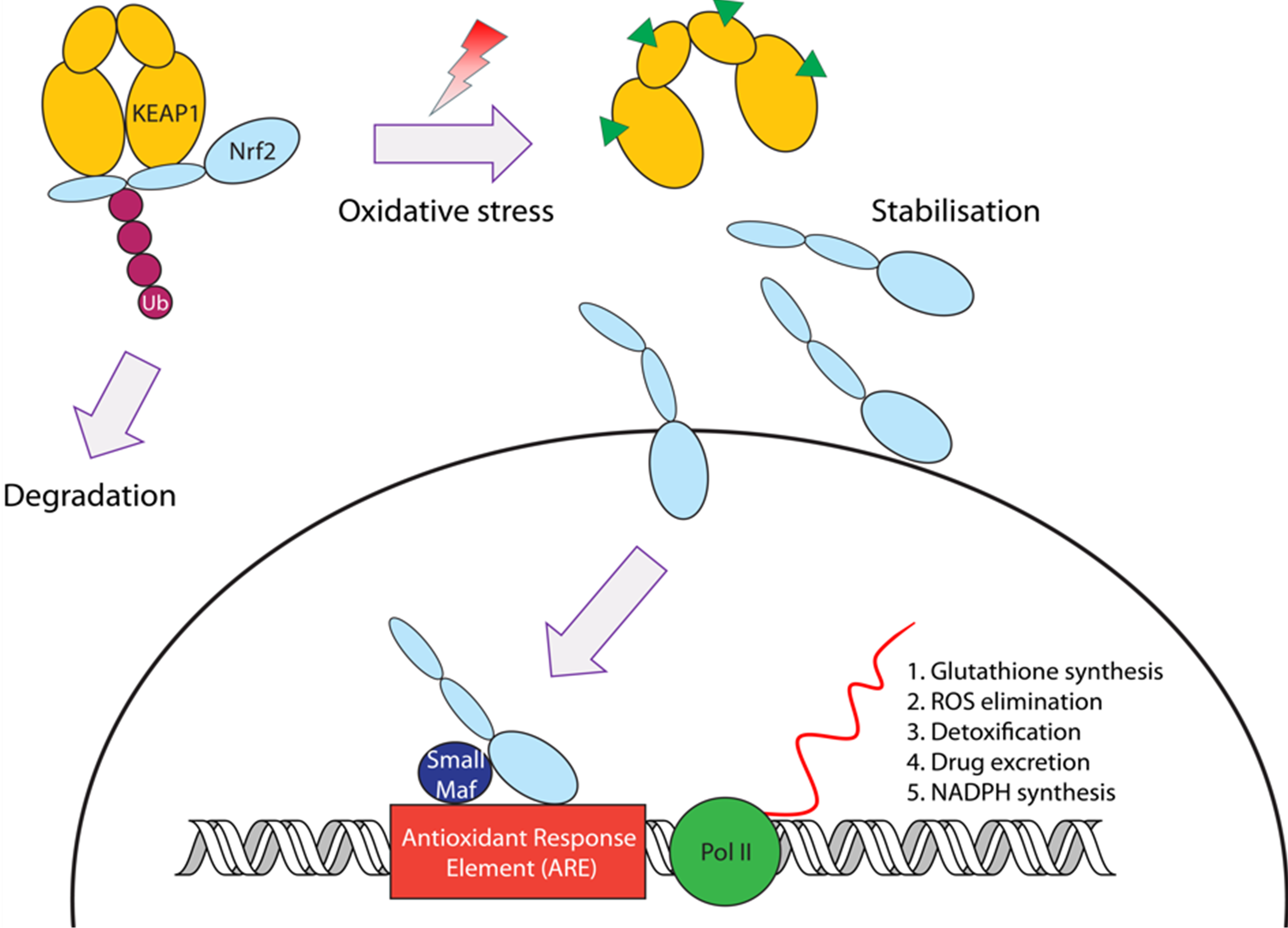 This research will seek to develop the first imaging agent to enable the temporal and spatial assessment of Nrf2 expression in living subjects. We will develop novel Nrf2 radiotracers based on the structures of existing high-affinity Nrf2-binders, ML385 (Singh, Venkannagari et al. 2016) and AEM1 (Bollong, Yun et al. 2015) (Fig. 2). Both ML385 and AEM1 represent best-in-class Nrf2 inhibitors, with half maximal inhibitory activities of Nrf2-DNA binding at submicromolar potencies, resulting in a down-regulation of Nrf2-target genes, sensitisation to chemotherapies, and a reduction in NSCLC tumour growth in vivo. (Bollong, Yun et al. 2015, Singh, Venkannagari et al. 2016)

Fig. 2.  Structures of putative Nrf2 radiotracers. Structures are based on known Nrf2 inhibitors, ML385 (i) and AEM1 (ii) labelled with the positron emitter, fluorine-18.

Given the excellent pharmacodynamic profile of ML385 and AEM1, we will use these chemical structures to develop novel Nrf2 radiotracers, through their radiolabelling with fluorine-18. Precursors for labelling will be synthesised with labile leaving groups to allow rapid and reproducible radiofluorination according to previously published methodology (Tredwell, Preshlock et al. 2014) (Fig. 3). We will assess radiotracer uptake and binding specificity in A549 NSCLC cells in culture which harbour a mutation in KEAP1. Time course of radiotracer uptake and retention will be performed in Nrf2 wild-type (WT), Nrf2 knockout and Nrf2 overexpressing cells. A lead candidate radiotracer (18F-NRF2) will be selected based on magnitude of cell uptake and specificity for Nrf2.  In addition, we will assess 18F-NRF2 pharmokinetics and in vivo stability following intravenous injection of the radiotracer.

Chemotherapeutic agents have been shown to induce oxidative stress in cancer patients (Clemens, Ladner et al. 1990, Durken, Agbenu et al. 1995, Erhola, Kellokumpu-Lehtinen et al. 1996). Given that Nrf2 is induced following therapy to counteract oxidative stress (Mullany and Richards 2012)), a non-invasive measure of tumour Nrf2 will provide an early assessment of drug efficacy. Using Nrf2 WT and Nrf2-/- isogenic cells and tumour-bearing mice, we will assess the ability of 18F-NRF2 to monitor cisplatin-induced changes in Nrf2. It is hoped that through 18F-NRF2 imaging the oncologist will be able to identify NSCLC patients that are refractory to standard-of-care, allowing the transferral of drug-resistant patients to alternative therapies, thereby improving outcomes in this devastating disease.