The aims of the project are:

(1) Prepare molecular imaging PET/SPECT radiotracers based on dendritic chelators. The new radiotracers will contain (i) multiple copies of a targeting peptide and (ii) multiple chelators. This will increase both the affinity of a radiotracer for its complementary receptor and the specific activity of the radiotracer respectively.
(2) Assess the radiolabeled dendritic conjugates in vitro and in vivo, and determine whether a dendritic design increases delivery of radioactivity to target tissue relative to monomeric homologues.
(3) Use selected dendritic conjugates to test a pretargeting approach in vivo. In this approach, the unlabeled conjugate is administered and localises at a receptor binding site in vivo, followed by administration of the radiometal that targets the dendritic chelator.

Background
Bifunctional chelators in radiochemistry possess both a ligand that forms a thermodynamically stable and/or kinetically inert coordination bond to a metallic radioisotope and a functional group that provides a convenient attachment point for a biological targeting group, such as a peptide. Peptide-based imaging agents in nuclear medicine have utility in diagnosis, prognosis and selection of therapeutic regimes for patients. PET, SPECT and therapeutic radiometals can be incorporated into clinically relevant peptides via a bifunctional chelator, providing effective and sensitive radiotracers for molecular imaging and/or molecular radiotherapy.
This project investigates new ways of increasing radioactive payload of a molecule targeted to peptide receptors at disease tissue. Given any peptide, this can be achieved in two ways: (i) incorporation of multiple peptide copies to enhance affinity, or (ii) increase the number of radiometal ions per molecule bound at each receptor site in vivo. This project will incorporate both strategies into a molecular imaging agent.
Multimeric and dendrimer-like peptide-based radiotracers have demonstrated increased accumulation over their monomeric analogues at target cells.1 Multimeric constructs containing multiple chelating groups have been investigated as agents for sequestering trace metals.2 A limited body of literature has demonstrated that such agents can be used for coordination of SPECT radiometals.3
The aim of this project is to prepare radiolabeled bioconjugates containing multiple copies of a peptide and multiple copies of a chelator, and characterise the biological behaviour of such species.
Preliminary data
We have recently synthesised a bifunctional chelator that incorporates nine bidentate hydroxypyridinone (HP) groups. When a 3-hydroxypyridin-4-one is deprotonated at its -OH group, the heterocycle can coordinate in a bidentate O2 mode to a metal ion to give a five-membered chelate ring. Thus, dendritic HP9s can coordinate up to three metal ions in an O6 octahedral geometry. HP9 also contains an isothiocyanate group that reacts with primary amines. Additionally, we have prepared a trimeric compound, RGD3, with three cyclic “RGD” peptides that target ï¡vï¢3 integrin receptors. Conjugation of the new bifunctional chelator with the scaffold containing multiple peptide groups has yielded HP9-RGD3 (Figure 1), which has been radiolabeled with 68Ga3+.
The dendritic compound HP9-RGD3 can be radiolabeled in 97% radiochemical yield at a 3-fold higher maximum specific activity than its homologues, HP3-RGD and HP3-RGD3 that contain only a single metal binding site. PET scanning and biodistribution studies show that [68Ga(HP9-RGD3)] demonstrates higher in vivo receptor-mediated tumour uptake than [68Ga(HP3-RGD)] and [68Ga(HP3-RGD3)] (Figure 1). However, concomitant non-target organ retention of [68Ga(HP9-RGD3)] results in low tumour to non-target organ contrast in PET images. 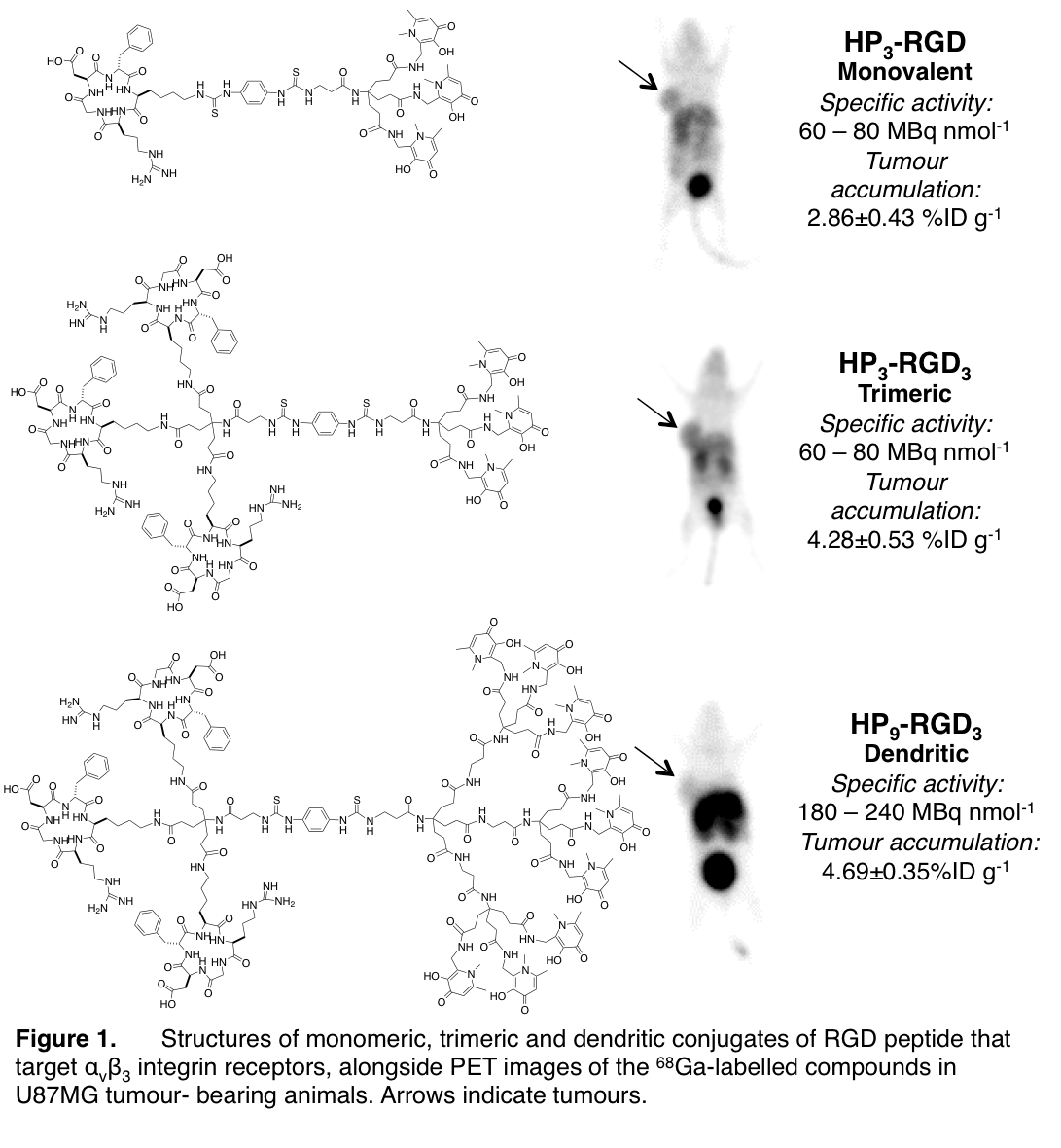 Project description
The student will synthesise new bifunctional dendritic chelators, and conjugate them to a multimeric peptide. After radiolabelling studies, the student will characterise the new radiotracers’ biological properties in vitro and in vivo.
Finally, the student will assess the ability of the unlabeled dendritic conjugate to bind a radiometallic ion in vivo. In this novel pretargeting approach (Figure 2), it is envisaged that a targeting peptide/protein attached to the dendritic unlabeled chelator will bind to its cellular target site prior to radiolabeling. Once this molecular agent binds to its target receptor in vivo, the radio-metal will be injected. The student will assess whether the receptor-bound conjugate can bind to the radiometal under these in vivo conditions. A pretargeting approach requires a high affinity metal-chelate pair (high thermodynamic stability) as well as low kinetic barriers to complex formation (rapid binding upon an encounter between the chelator and the radiometal).