Myelin is essential for normal brain function, providing both electrical insulation and increased conduction velocity for neuronal axons. It is found mainly in the white matter of the brain, which is very much the communication backbone of the central nervous system. Disruptions to myelin reduce the affected axons’ capacity to transmit signals between different parts of the brain, leading to impaired function for the affected system with serious neurological consequences. While myelin accounts for 20-30% of brain white matter, it is ignored in most existing models of microstructure used in diffusion MRI, since the diffusion MRI signal is insensitive to myelin. Being able to measure myelin content in a robust manner within a clinically feasible time would therefore be a very important contribution to the field in its own right, and its inclusion into microstructural models would be a major step forward for microstructure imaging. 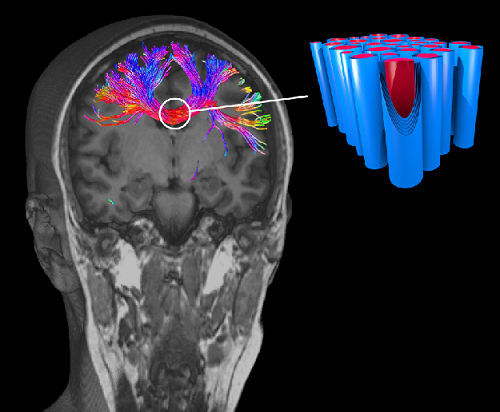 White matter pathways determined from a diffusion MRI tractography experiment. These tracts comprise myelinated axons, a schematic of which is shown on the right-hand side.

The aims of this project are (i) to examine the various effects that underpin each of the existing techniques for myelin imaging, and with this information design a sequence with enhanced sensitivity and/or specificity to myelin; and (ii) to include myelin information into existing and future microstructure models to dramatically improve their biological relevance.