Project Description / Background: Epilepsy is the most common neurological condition in children. The most common cause of drug resistant focal epilepsy in children are malformations of cortical development (MCD). In these conditions, alterations to the processes of cell migration and differentiation early in life lead to cortical areas that have altered tissue structure and macromolecular content. MRI is the principal imaging modality to detect these abnormalities, and it is effective when they are extensive or involve strong changes in MRI image contrast compared to healthy cortex. The ability to identify these abnormalities with greater sensitivity and/or specificity with associated prognostic value is the clinical motivation for this project. The team of Dr Carmichael have been developing and using quantitative structural MRI aiming for more optimal non-invasive lesion detection and phenotyping [1,2] that includes a semi-quantitative measure of magnetisation transfer or MTsat. Notably, MTsat had the highest contrast in epilepsy lesions compared to other parameters (PD, T2*,T1) at 3T. MT refers to the exchange of magnetization between protons in water molecules (the main source of MRI signal) and protons in macromolecules. The macromolecular protons cannot be detected directly, but we can infer their presence by observing the water. MT is sensitive to macromolecular content – such as myelin, a key component in healthy brain cells that allows efficient electrical conduction of signals. However, typical MT measures are not specific to myelin. T1 is also mapped and is sensitive to macromolecular content in addition to tissue iron content. The team of Dr Malik have recently developed efficient methods to measure a type of MT effect, known as ‘inhomogeneous MT’ or ihMT [3]. This is a new endogenous MR imaging contrast mechanism that has a greater specificity for myelin (or similar molecules) by exploiting its different response to positive and negative off-resonance pulses. However, the amount of unique information that ihMT carries and its utility for improving the sensitivity of detecting brain lesions is unknown. To date this work has been performed at 3T, although we can now utilise a new more powerful 7T MRI scanner that provides enhanced sensitivity and provides opportunities for measuring shorter T1 components because they decay more slowly at 7T. To explore this question, we are going to develop and test models of the interrelationship between these various parameters (i.e. ihMT, MTSat and T1) in the human brain. This will define the key parameters that best differentiate tissue types in healthy brains and in patients with epilepsy. This project can be conceptualised as developing an increased understanding of the mapping between different MRI parameters and tissue signal changes that need to be maximised to reveal brain abnormalities. The MRI parameters are related and so we will derive the unique contribution of each and from this knowledge understand the optimal subset of measurements. This will inform the optimum multivariate data acquisition in terms of sensitivity that in turn can be validated using an acquisition strategy optimised on this basis. To perform this analysis we will use multivariate machine learning and AI network based approaches. 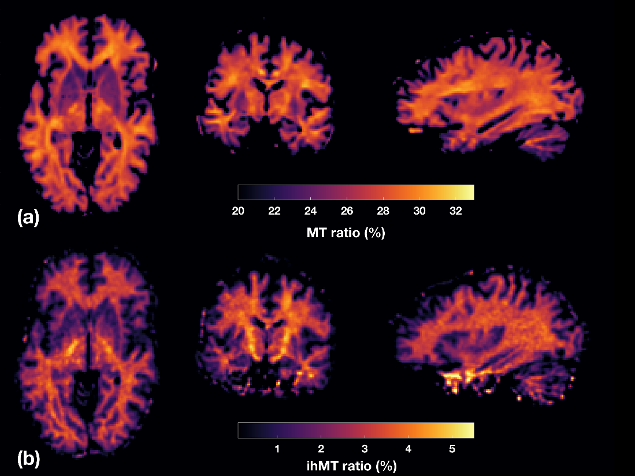 Figure 1: Comparison between MT ratio (a) and ihMT ratio in the human brain