Mining for iron in the brain: a deep learning approach

Brain iron accumulate with ageing, with advancing age being the major risk factor for neurodegenerative diseases such as Alzheimer’s Disease (AD; Walker et al., 2016; Ashraf et al., 2018). While iron chelation therapy has been shown to be effective in attenuating symptoms in experimental models and some studies in man for AD, Parkinson’s Disease (PD) and multiple sclerosis (MS), it is only recently that iron chelation has been considered a therapy for these and other neurodegenerative diseases. Iron chelation trials are ongoing in PD and one in AD has recently started. From informal discussions, iron chelation therapy appears promising in the PD trials.

The challenge in using therapeutic iron chelation for maintaining healthy brain ageing or neurodegenerative diseases is the difficulty in in vivo measuring and monitoring iron in human brain. MRI methods including T1, T2 and T2* relaxometry and quantitative susceptibility mapping (QSM), are sensitive to iron content to differing extents and specificities. We and others have used T2 and T2* relaxometry to non-invasively assess iron in vivo, and we have shown their differential associations with synchrotron radiation X-ray fluorescence (SRXRF)-measured iron content (Walker et al., 2016). However, the influence of the cellular and molecular environment, e.g., myelin, on the relationship between various QMRI measurements and iron remain to be studied. Studying post-mortem human brain tissues from control and AD patients, PWS et al., (unpublished data), have observed the relationship between QMRI and iron is better in grey than white matter, and the association is also better in grey matter in AD than in controls, suggesting the modulation of the relationship between QMRI and iron by myelin. Additionally, iron and other transition metals, including copper and zinc are known to associate with amyloid plaques (AP) and neurofibrillary tangles (NFT). How the associations between QMRI and iron are affected by AP and NFT has not been investigated.

The purpose of this project is to develop an interpretable deep learning approach to estimate iron content in human brain from multi-modal QMRI data (see Illustration at the end). We will apply QMRI techniques sensitive to iron, tissue microstructure and composition to post-mortem brain tissue, prior to histology and SRXRF iron mapping pf the same tissue (see adjacent Figure). While histology and SRXRF iron mapping can provide ‘ground truth’, they can only be used post-mortem. By relating these measurements to QMRI, we will obtain a non-invasive tool with the potential for measuring iron content in-vivo. 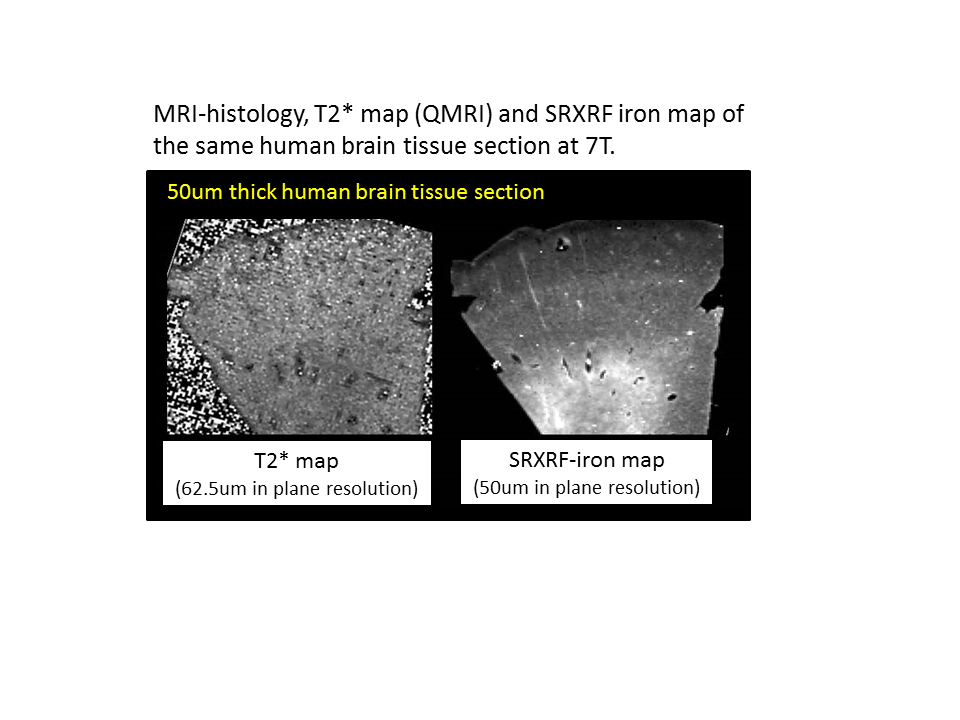 This project will benefit from a bespoke state-of-the art MRI hardware that includes recently customized high signal-to-noise (SNR) MRI radiofrequency (RF) coils compatible with existing pre-clinical 9.4T MRI scanners and innovative robust tissue handling system for MRI-histology that enables us to perform MRI at/near microscopic scales and minimise the complexity of overlaying QMRI and histology by performing both on the same slice of tissue.

We will develop an integrated deep learning framework that will align multimodal QMRI, histology and iron maps, bridge the differences in the resolutions and ultimately construct a model of neuron, astrocyte, microglia and oligodendrocyte composition, iron content and tissue microstructure from QMRI. We will generate an integrated MRI-view of brain iron distribution in the presence and absence of AD pathology, including neuroinflammation, AP and NFT.