This project has elements of both stream 1 and stream 2 topics so could suit students with strengths in either physics/bioengineering or chemistry. We seek the best candidate who wants to do some synthetic chemistry, alongside the bioengineering and image analysis.

In stratified medicine, diseases are diagnosed and treated according to biological markers in a patient, allowing for targeted treatments and preventing unnecessary treatments. The current diagnostic gold standard is the needle biopsy, whereby a thick needle penetrates through healthy tissue to cut a tissue volume for histological examination. This procedure has its limitations: potential side effects (eg damaging of healthy tissue, pain, bleeding, infection) and can lead to incorrect diagnoses due to poor spatial sampling of the tissue volume. A needle biopsy is also not feasible for certain organs (eg brain), and therefore cannot be used to identify certain diseases. Molecular Imaging by PET, MRI, CT, or ultrasound aims to provide an alternative – if not advantageous – method for diagnosing diseases. “Tagged” targeting contrast agents (CAs) are systemically administered and circulate throughout the entire body. If the agent sufficiently accumulates in the diseased region, it has the potential to provide a unique molecular signature detectable by an imaging modality, such as MRI. However, many targeted CAs fail to sufficiently accumulate at the target and those that do, require high administration doses that elicit side effects too extreme for clinical use. Thus diagnosis of deadly diseases, such as cancer, remains noninvasively unidentifiable making treatment selection inaccurate and its associated side effects unnecessary.

In recent years, ultrasound technologies have been developed to open capillaries and thereby deliver normally impermeable molecules and nanoparticles into a tissue volume. Ultrasound is a mechanical wave, which can propagate through soft tissue and bone. When emitted from a focussed transducer, ultrasound converges to a small volume on the order of cubic millimetres while leaving the surroundings intact. Systemically administered clinically-approved microbubbles are driven by ultrasound to expand and contract against the capillary walls and create a transient permeability increase. Specific parameters have been shown to homogeneously deliver a high dose of molecules to the target volume without cellular damage [1, 2] and the Choi Group has further optimised these sequences [3]. 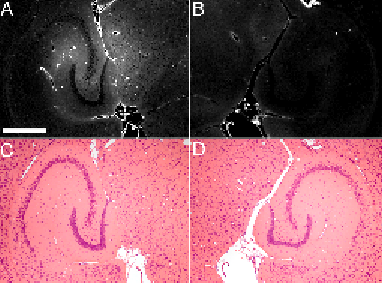 Fig 1. Safe in vivo capillary opening. The (A, C) left hippocampus was sonicated using short US pulses during systemic microbubble circulation while the (B, D) right region was not sonicated. (A, B)  Fluorescently-labeled 3-kDa dextran was delivered to the left region (C, D) without detectable damage as assessed using H&E staining. The white bar in (A) depicts 1 mm.

Highly paramagnetic metals, such as gadolinium, held within a stable chelating ligand, have been used successfully as CAs in MRI, enhancing signal intensity to aid in the diagnosis of various disease states, such as inflammation and cancer. The design of targeted Gd-based CAs, usually based around the classical macrocyclic motif DOTA [4], and targeted nanoparticle (NP)-based CAs, are expanding research areas eg for imaging proteins involved in disease. The Long group has developed Gd-DO3A compounds peripherally functionalised with targeting peptides for formyl peptide receptors [4] and Fe3O4 SPIOs functionalised for cancer targets, with NP-surface ligand receptors such as a cyclopentapeptide for CXCR4 and the RGD peptide for tumours over-expressing the αvβ3 integrin [5]. In the proposed research, these targeted agents or similar bioconjugation strategies of CAs will be utilised, particularly for cancerous tumour targets.
In this project, the state-of-the-art techniques in ultrasound-mediated capillary opening, targeted MRI-CAs, and MRI pulse sequences will be combined to create a noninvasive molecular biopsy system that can be assessed by MRI. 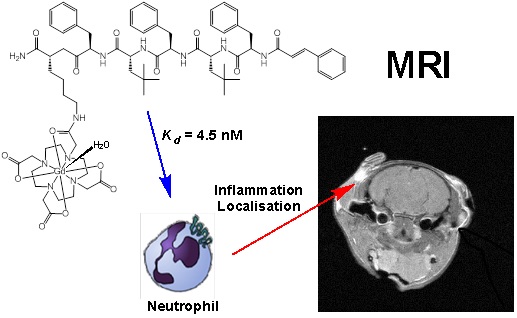