G-quadruplexes (G Qs) are non-canonical secondary structures that can be adopted by guanine-rich DNA and RNA sequences. Such DNA sequences are frequently found in telomeres and regulatory regions of oncogenes (e.g. MYC), thus playing important roles in cancer biology. Furthermore, G Qs of messenger RNA were very recently identified to be responsible for translational control and immune evasion of viruses (e.g. Epstein-Barr virus). Various small molecules were designed to interact with a variety of G Qs most notably some with promising anti-cancer activity in tumour xenograft models, which lately entered phase II clinical trials on cancer patients. However, as with many small molecule drugs systemic administration has significant undesired side-effects. Targeting the drug to tumour cells can resolve this issue with a particular promising concept represented by so-called Antibody-Drug-Conjugates (ADC); they consist of an antibody for tumour targeting, a highly cytotoxic agent, and a linker that must not interfere with the functions of either of the other components; the first ADCs were recently licensed and have entered the market. 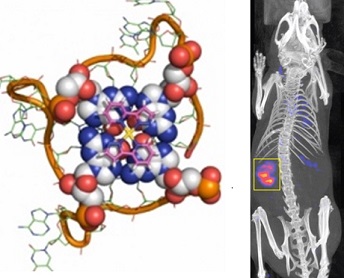 The goal of this PhD project is to build on the ADC concept and develop a theranostic probe that will allow tumour imaging at a macroscopic (whole-body) and microscopic level and at the same time deliver selectively a highly cytotoxic agent into tumours. The student will combine a G-quadruplex binder previously developed in the Vilar group, which acts both as an optical probe and cytotoxic agent, with a tumour-targeting moiety and a probe that allows whole-body radionuclide imaging (PET/SPECT). The product will be the first tumour-targeted G Q that can be tracked by in vivo imaging. In addition, we plan to further refine the approach converting the cytotoxic drug into a pro-drug to further reduce off-target cytotoxicity.