Aims of the Project:

To determine how the diffusion-MRI signal is modulated by different brain cell types, in particular microglia and their assorted morphologies, in the grey matter of Alzheimer’s Disease.

Dementia describes problems in memory, thinking and/or making decisions that interfere with everyday living, with Alzheimer’s Disease (AD) being the most common type. While AD is diagnosed, it is only at post-mortem that the diagnosis is confirmed, with microscopic findings of abnormal clumps of beta-amyloid protein and tau. Traditionally, AD treatments have focused on depleting brain beta-amyloid. However, their lack of success has led to the consideration of other approaches, including those to reduce neuroinflammation, characteristic of AD. Neuroinflammation occurs when the brain’s immune system is triggered, e.g., by injury, infection, or toxin exposure, and leads to harmful substances being removed and tissue healing. While neuroinflammation is thought to protect the brain initially, continued neuroinflammation can be damaging, although our understanding of the role of neuroinflammation in causing brain damage in AD remains limited.

Neuroinflammatory processes are mediated by microglia, a type of brain cell. Microglia have a distinct shape, with a cell body from which several long branches extend out to “sense” the surroundings. During neuroinflammation, microglia can become “activated” or “reactive” and change shape: microglial branches become shorter and thickened, the cell body can enlarge, and/or become rod-shape or amoeboid-like. Thus, microglial shape is closely related to its functional state, and knowing microglial function will help identify the appropriate neuroinflammatory targets in AD to yield successful disease therapies. Can we visualize microglia and their shape in the living brain?

Magnetic resonance imaging (MRI) provides a “window” into the living brain. Diffusion-MRI is sensitive to the random movements of water molecules, which is hindered by “obstacles” such as cell membranes. Frequently, diffusion-MRI is used to image myelin, large amounts of which are found in brain white matter, with myelin being often disrupted in brain diseases including AD. In this project, we will investigate the less commonly studied, brain grey matter, which has much less myelin, to study in particular, microglia and their shapes/functions. Notably, AD is considered predominantly, a grey matter brain disease.

Traditionally, diffusion-MRI is performed on large brain samples or the living brain. The relationships between diffusion measurements and brain microstructure are then deciphered by correlating diffusion-MRI and microscopic findings. However, comparing such MRI and histology datasets is fraught with problems. Trying to match the different image types is hampered by the very different measurement dimensions of MRI and histology, and exacerbated by tissue distortion during histological processing. In this project, we will use bespoke MRI hardware to acquire ultra-high resolution diffusion-MRI data of histological-sized samples, and then the same sample subsequently undergoes histology. Thus, difficulties in matching MRI and histology images are minimized, enabling accurate determination of the relationships between diffusion-MRI with brain cell types, in particular, microglia and their assorted shapes.

We aim to apply this approach to brain tissue from AD and age-matched healthy subjects, towards future clinical translation of project findings to assessing neuroinflammation and its role in AD, and monitoring AD immunotherapies in the living brain.

Applicants will ideally have knowledge and experience in physics, biomedical engineering, neuroscience and histological-based techniques. 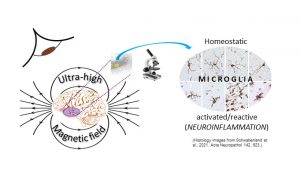