Aim of the PhD Project:

Theranostics describes the use of the same radionuclide to both image and treat disease. In this project, the disease in question is cancer. The imaging component of any theranostic approach would help both in the initial diagnosis of disease as well as during follow-up to determine if therapy is working. In molecular radionuclide therapy, the radioactivity is injected into a patient’s bloodstream and then homes to a tumour, even if it has metastasised throughout the body. Radiotherapy is thus delivered very precisely.

Whereas the majority of MRT approaches have used beta-emitting radionuclides, thallium-201 emits Auger electrons. Unlike beta particles, which travel up to 1000 cells away from the source, Auger electrons only irradiate the cell to which it is attached. This therefore enables the irradiation of single cancer cells and small groups of metastases. Equally, the high linear energy transfer (i.e. large radiation dose deposited in a tiny area), means that potentially resistance to therapies, including radioresistance, may be overcome.

Thallium-201 (201Tl, t1/2 = 73 h) is well-known in diagnostic nuclear medicine. By mimicking the biological behaviour of potassium, it has played a major role in myocardial perfusion scintigraphy, until it was largely replaced by 99mTc labelled complexes. 201Tl has also been used for tumour imaging, to evaluate chemotherapy responses and tumour malignancy. Apart from its gamma rays (135 keV – 3%, 167 keV – 10%) and X-rays (67-83 keV – 94%) used in clinical imaging, 201Tl decay by electron capture to stable mercury (201Hg) also produces around 37 short-range Auger and Coster-Kronig electrons, one of the highest numbers among other Auger-electron emitters with therapeutic potential.  Auger electron-emitters such as 111In,125I and 67Ga, have already shown potential for targeted radionuclide therapy of cancer, especially when delivered close to sensitive cellular targets such as DNA and plasma membrane. However, the therapeutic potential of 201Tl has barely been studied, despite its potent shower of Auger electrons and good worldwide availability.

We have recently shown that non-targeted delivery of thallium-201 in prostate cancer cells damages their DNA. Clonogenic studies also showed a 90% reduction in clonogenic survival. This was achieved at only 0.29 Bq/cell, which is significantly lower than for other Auger electron-emitting radionuclides such as gallium-67 and indium-111. However, as thallium goes to the heart, targeted approaches are needed in vivo. To date, targeted delivery of thallium-201 to cancer cells has been hindered to date due to lack of suitable bifunctional chelator chemistry. Here, work will be carried out to create a novel targeted thallium-201 radiopharmaceuticals, by creating and using recently explored chelators for stable binding of thallium-201 to cancer-targeting compounds.

Hypothesis: Thallium-201 radiopharmaceuticals can be used as an effective theranostic agent in cancer in a targeted approach. 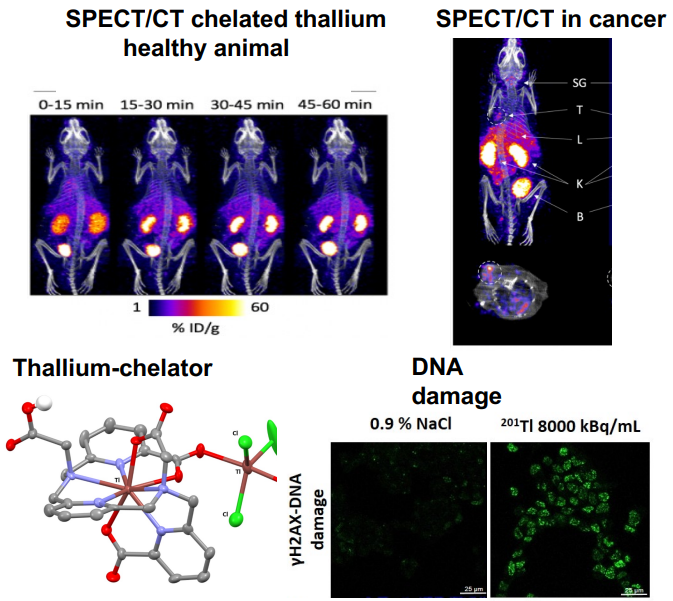