Pro-radiotracers unmasked on the far side of the blood-brain-barrier: a new concept in brain molecular imaging using a pro-drug approach

In this project, the PhD student will synthesise and study pro-radiotracers labelled with two stable or radioactive isotopes of carbon (11C and 13C) with a combination of techniques including: Positron Emission Tomography (PET), NMR spectroscopy, hyperpolarised 13C MRI spectroscopic imaging and Dynamic Nuclear Polarisation (DNP). The use of radioactively labelled 11C PET proradiotracers does not usually distinguish the metabolic fate of a molecular entity in vivo and thus the kinetics of the proradiotracer de-esterification process is largely unknown. Preclinical studies using hyperpolarised 13C have explored the use of prodrugs (ester ethyl pyruvate) to enhance its brain uptake and observed its de-esterification to pyruvate as well as subsequent metabolism to form lactate to determine the activity of lactate dehydrogenase within the brain [3].

We have recently developed 11C-pro-radiotracers to image the excitatory amino acid transporter 2 (EAAT2) and Glutamate carboxypeptidase II (GCPII) for CNS molecular imaging application [4]. However, a fundamental understanding of the metabolic fate of the pro-radiotracer in the brain is required to interpret the results and fine tune the in vivo kinetics of these imaging agents. In vivo PET imaging with pro-radiotracers will not provide information on the identity of the molecular scaffold associated with the labelling radionuclide. Therefore, we propose to combine the radiolabelling approach in parallel with stable isotopic labelling and NMR spectroscopy to determine the rate of metabolism of a small library of ester prodrugs of a simplified model substrate. Previous work on a related substrate molecule – 3,5-difluorobenzoyl-L-glutamic acid – successfully showed the ability to measure the kinetics of substrate de-esterification by the enzyme carboxypeptidaseG2 (CPG2) in real-time using either thermally polarised 19F NMR or exploiting the enhanced sensitivity afforded by hyperpolarised 13C MRI [5].

NMR spectroscopy is thus uniquely placed to allow the detection of prodrug as well as downstream carboxylic acid metabolites (drug) by virtue of their chemical shift differences.
Furthermore, radiolabelling the same pro-radiotracer concurrently in the carboxylic acid [retained in tissue] or ester function [washed out of tissue] will provide divergent in vivo kinetics [by PET] to elucidate the rate of pro-radiotracer de-esterification. Combined, these data would generate engineering rules which would be exploited to target and optimise selected imaging pro-radiotracers [e.g. Glutamine transporter pro-radiotracers] for BBB penetration and conversion to their active forms on the other side of the BBB, thus allowing for optimised imaging characteristics and a detailed interpretation of the molecular basis of the in vivo PET findings.

(4) Luzi et al and Downey et al – accepted as oral presentations at the International Society of Radiopharmaceutical Sciences (ISRS) meeting in Beijing May 2019 – Manuscripts in preparation. 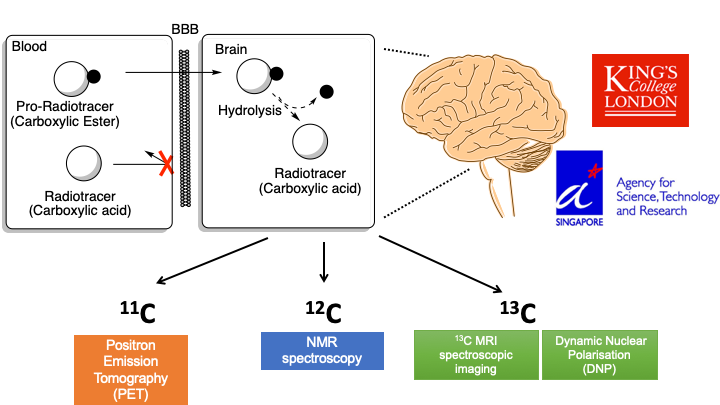